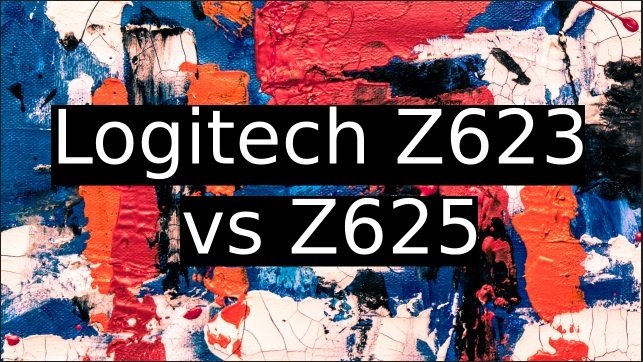 Logitech is a Swiss company Established in 1981 that emphasizes Innovation and quality. They are known for their mouse, keyboard, and monitors that sell incredibly well across the world. In this post, we have included a detailed comparison of Logitech Z623 vs Z625.

However, the Audio division of this company excels in the industry.

Although they might not compete with the best Audio brands like Bose, Sennheiser, Polk, etc., their audio products are excellent and provide exceptional audio quality.

This Particular article will talk about two Logitech Tabletop speakers, mainly the Z623 and the Z625, and draw a comparison between the two.

The Logitech Z623 and Z625 are two of the most common 2.1 speaker systems available.

Both the speakers are pretty impressive, and it’s often quite rare that you can find speakers in their price bracket with THX clearance.

The only difference between the Logitech Z623 and Z625 is that the Z625 has an optical input.

We go through the specifications and features of these speakers in detail below to determine whether they suit your needs.

Let us talk about the Logitech Z623.

The Logitech Z623 2.1 tabletop speaker  is a powerful speaker with a fair price tag. At first sight, these speakers seem to be identical to all other speakers in the industry.

The Logitech Z623 has a rough appearance with gaming feel to it.

It fits in with most normal 2.1 speaker systems, and when it falls to results, these speakers  claim the first place.

Customers that do not prefer anything that looks strange will appreciate the gaming appearance and simplistic minimalistic style.

Aside from appearances, the Logitech Z623 is primarily concerned with audio.

It will meet all of your everyday sound needs, including film, music, sports, and a variety of other things.

When used with the 3.5 mm input cord, it can also be used as a mobile speaker.

Since you will be having these speakers next to you when enjoying any game, they have been changed a tiny bit to offer the optimal experience.

These speakers are made up of three different components.

Furthermore, the right speaker comes with the key functions on its front, including power on/off, volume regulator buttons, and bass control.

A forward boosting driver in both the left and right speakers drives the bass.

This ensures you have two speakers that can provide all of the bass you require while simultaneously providing you with all the buttons to control it.

For your comfort, the right speaker comes with a 3.5 mm input, an AUX port, and a headphone jack.

Some may be skeptical, but the driver alone has a lot of control when transmitting sound.

The RCA input is located on the back of the subwoofer and attaches to your computer or audio device.

The subwoofer must also be connected to the left and right speakers for control, and both cables are provided in the box.

Finally, there is the subwoofer; despite the speaker’s large height, the woofer driver is tiny.

The Build and design of this speaker are also quite stunning.

Both the left and right speakers have a rubber grip on the base to protect them from shifting while producing music at a high volume and bass.

The rubber grips are a great addition as these speakers can get noisy. Furthermore, the left and right speakers are angled upwards toward your ear.

This entails a much more personal sound quality.

The Z623 is not to be underestimated when it comes to quality. By turning up the volume and bass, you can get a sense of its performance.

You can feel the windows and furniture vibrate a bit when you play music because of reverberation.

These speakers may seem to be underperforming, but they will surely surprise you.

This speaker is great for a movie night with your parents, as they provide an immersive atmosphere.

These little speakers can deliver smooth and precise sound with exceptional quality.

Thanks to its THX certification, the Logitech Z623 is on a level with several high-end gaming and audio speakers.

Now let us talk about the Logitech Z625:

The Logitech Z625, which is somewhat identical to its counterpart, the Logitech Z623, is a compact tabletop speaker with a subwoofer that is a decent starting point for gamers searching for a cheap speaker to boost their existing gaming setup.

Except for a matte finish, there is not much of a distinction between the Z625 and the Z623 at first sight.

The Z623 is a bit shinier, and the Z625 is often referred to as the Z623s’ replacement. This speaker has everything that its counterpart offers and more.

Straight away, you will see that they are visually identical; the buttons are on the front of the right speaker, whereas the left is sleek and tidy.

The optical input is a high-speed communication that can be found in several soundbars.

This is very helpful when it comes to connecting the speakers to the audio system.

This function would be of immense help for a TV with multiple HDMI ports because the connectivity is smooth and quick.

The subwoofer, as anticipated, delivers ground-shaking bass without sacrificing quality.

The bass is powerful and clear, and you can experience it when listening to music or playing games.

The Z625s’ mid and high-range frequencies just cannot be overlooked.

It is sharp and straightforward, and even at high levels, the sound quality does not deteriorate. The optical input function of the Z625 is its key selling point.

Optical ports that attach to soundbars are also used on many game consoles and televisions.

The Z625 is on the same level with several premium soundbars, thanks to Logitech trying to bridge the gap.

The optical input allows users to adjust TV inputs easily, and sound is naturally redirected to the speakers without the need to alter it physically.

Moreover, the added benefit of comfort that the speakers and audio can all switch on simultaneously.

The optical connectivity is fantastic, but it is not the only aspect that elevates the Z625 to the top of the speaker range.

This is all possible thanks to the speaker driver’s ability to preserve the sound’s mid-range accuracy while efficiently replicating the surround-sound impact.

The Z625 is perfect for gamers and, in particular, movie watchers.

The Logitech Z625 is perhaps the best affordable gaming and tabletop speaker in the industry, with only 2 drivers.

Now that we know both these speakers and their features, let us see how they compare against one another based on few factors:

The audio quality of the Logitech Z623 is excellent, with clear and precise high notes and a wide midrange generated by the two speakers.

The Z623 offers 35 watts for each speaker and 130 watts for the subwoofer, making it ideal for a small get-together.

Magnetically protected drivers with an aluminum phase plug are hidden behind the speakers’ grills.

Both the speakers are THX accredited and engineered to offer the most promising performance.

The term THX, which stands for “Tomlinson Holman’s Experiment,” refers to the fact that these speakers had to overcome a series of checks and criteria to meet industry sound production requirements.

This means that the speakers can play the music that the video, game, or songs audio engineer told the customer to hear.

The THX credential is an adamant quality to achieve but buying a speaker ensures you are getting the best sound possible.

The Logitech Z623 and Z625 each possess a plastic build that does not feel or sound inexpensive, despite being on the lower end of the price range.

The subwoofer and 2 speakers are well-made and would not quickly crack.

The power switch and the volume and bass control buttons on the front are located on the right speaker.

On the other hand, the subwoofer has a traditional design with sharp corners and a metal grille in the middle.

Unless you inspect the rear subwoofer inputs closely, you will not be able to say the Logitech Z623 and Z625 apart.

The Z623 only has analog inputs, while the Z625 has an optical audio port as well.

Laptops, televisions, and gaming consoles can all be connected to the Logitech Z623 and Z625.

The Z623 only has a 3.5mm headphone jack and RCA inputs, while the Z625 has an optical audio port for high-definition audio processing.

You can attach up to three devices to the Z625 immediately, eliminating the need to reconnect any moment you choose to switch across them.

While their cables are long enough for most laptop configurations, it is a wise idea to double-check if your setup at home would require the purchase of a longer line.

Bluetooth networking is probably one feature that Logitech should have provided in the Z623 and Z625 for a smoother, more compact connection.

Despite this, they are always simple to set up and attach to your desired device.

Both these Logitech speakers are stunning and are second to none in terms of their sound quality.

However, there is not much that separates the two besides the stark price difference.

Both these speakers are budget-friendly speakers that can solve all your immediate sound problems.

Irrespective of the choice you make, you should be assured that you are getting quality tabletop speakers.

Perhaps the optical input offered by the Z625 can be the deciding factor in your choice.

Let us know your views about Logitech Z623 vs Z625 in the comment section.

Check our recent posts on speakers, soundbars, earphones and headphones.