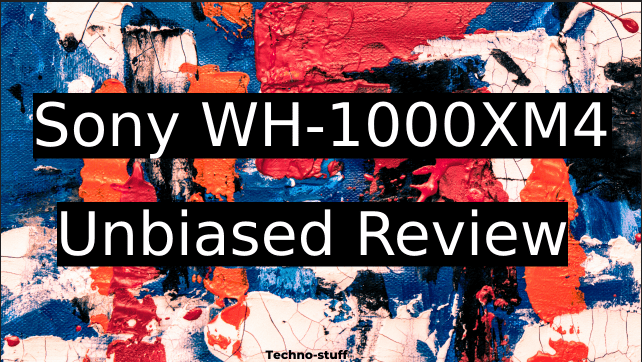 Sony WH 1000XM3’s were the best wireless headphones in terms of sound quality, noise cancellation and other features in their price range. Recently, Sony released a new version named Sony WH 1000XM4’s. In this post, we have included the Sony Wh1000XM4 review in detail.

In this post, we will be looking at all the features that come with these features. The newly added features in these headphones. Whether you should upgrade from XM3’s to XM4’s or not.

What’s Included In The Box?

Besides, Sony has upgraded to USB Type C port, which supports fast charging. However, the cable length is ultra-small, which is a bummer.

The airplane adapter is included in the package as well.

The ear cups of these headphones are well padded and soft.

The headband is soft and cushioned due to which you can wear these headphones for long hours comfortably.

Whats Controls Are Included On The Sony WH-1000XM4’s Headphones

The headphones include the USB Type C charging port. Additionally, there is a Custom button included, which we will discuss later.

Moreover, Sony WH-1000XM4’s include the power button to switch on and off the headphones.

It includes the Wear Detection Sensor inside the ear cups, which we will address below.

In terms of the headphones’ weight, the Sony WH-1000M4 weighs about the same as the XM3’s.

We found the pairing process of these headphones to the mobile device easy and quick.

The Sony-1000XM4 headphones come with Bluetooth 5.0, which provides phenomenal connectivity.

The sound of these headphones can be tweaked with the app included for Ios and Android devices.

The app of the headphones displays battery information and various other details. The Ambient Sound Control mode allows you to hear background noise, which can help to communicate with others or walk on the streets.

The active noise cancellation feature can be switched on and off from the app.

It includes a customizable Eq with sound presets that allow you to customize the sound quality as per your preferences.

Furthermore, it includes Custom profiles where you can tweak the sound settings as per your likings.

It includes Adaptive Sound Control, which customizes the sound as per your background

The Sony WH-1000XM4 headphones can be connected to two devices at the same time.

The Custom button included on the headphones can be customized to enable voice assistants and other features.

The app provides a StandBy mode where the headphones will power off when there is no playback to save battery.

Overall, the app is well built with an excellent User Interface, which makes it easy to customize the headphones’ features.

It would be advisable to update the app from time to time since Sony keeps releasing new updates with added features.

Passive noise isolation on these headphones is remarkable, which blocks background noise.

When the “Speak To Chat” feature is activated, the headphones provide ambient noise where small details can be heard.

Similarly, playback is resumed once you put the headphones back on, which is impressive.

The bass on these headphones is punchy and loud, which makes the hearing experience fun.


The mids on these headphones is precise and detailed.


The sound quality on the high notes and low notes are better on the Sony WH-1000XM4 than the M3’s.

Double-tap on the right ear cups is for play and pause of music. Slide forward is to skip to the next song.

Slide backward to play the previous song. You can adjust the volume of the headphones by swiping up, which increases the volume.

Similarly, you can lower the volume of the headphones by swiping down.

Voice assistants on these headphones can be activated and they are highly responsive, thereby allowing you to control your music with your voice.

The headphones include Alexa built-in, which is another added benefit.

The touch controls of these headphones are responsive, allowing you to control your music without using your phone.

These headphones include Bluetooth 5.0, which provides good connectivity.

In terms of connectivity and pairing, these headphones do a fabulous job.

The mic of these headphones is clear and crisp without any distortion.

The sound quality of the headphones is detailed and crisp in loud environments, which is remarkable.

The mic does block out background noise while speaking on calls.

There are five mics added to provide the best call quality.

The Sony WH-1000XM4’s can connect to multiple devices simultaneously, which the M3’s don’t have.

The Ambient mode feature has been tweaked and customized, which provides a more realistic experience compared to the M3’s.

The Sony WH-1000XM4’s include Wear Detection sensors, which the M3’s don’t have.

The headphones upscale low-quality music and make them sound better.

The mic of the headphones blocks out most of the background noise.

You can be a loud and noisy environment and the person on the receiving end won’t be able to hear any of that background noise.

Sony has certainly raised the quality standards with the Sony WH-1000XM4.

Let us know your thoughts about these headphones in the comment section.

Check out our recent content on headphones, earphones, soundbars and speakers.